Once again we are seeing that the government and the majority of the population are allowing money to be the deciding factor in all things.

Now there are plans afoot to have open cast mining in a floodplain which has some serious avian ecological significance.

The Nyl floodplain supports approximately 60% of the breeding population of inland water birds, and during the flooding of the plains it has been recorded that over 80,000 birds are attracted to the floodplain.

On a sub continental scale the Nyl River floodplain, when in flood, provides a water bird breeding habitat rivalled only by the Pongola River floodplain in KwaZulu-Natal Province, South Africa and the Okavango delta of Botswana (Higgins et al, 1996). Just imagine if the Okavango Delta was drained so that mining could take place there! 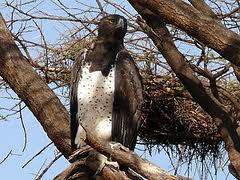 The Convention on Wetlands was held in Raamsar, Iran in 1971 and from there we have the “Ramsaar Convention” which is an intergovernmental treaty that states that all member countries will and must maintain the ecological character of their international important wetlands. It further states that governments are to plan for the wise or sustainable use of wetlands within their territories.

The Nyl river floodplains have been identified and recognised as a RAMSAR Wetland of International importance.

The proposed mining site falls entirely within the area designated as a nature reserve but this just doesn’t seem to worry anybody.  Once mining starts the entire area will be affected and there will be a loss of habitat and pollution which will be detrimental to the various bird species which use the wetlands for breeding. For those birds on the red list this could be a critical occurrence from which they may never recover. Duration of mining is estimated as being twenty years  so the impact is long term. My concern of the destruction of the habitat is that the birds that are displaced by the mining will not just be assimilated into the surrounding area. The surrounding area already has its own structure and carrying capacity. This means that these birds that have been displace will more than likely die.

The impact that the mine will have on the bird species found in the floodplain doesn’t stand much chance of being reversed.

From previous blogs that I have posted, it would seem that we as South Africans just don’t care a continental damn that open cast mining takes place in areas that supposedly are protected as nature reserves. Consider the unauthorised dune mining near Mtunzini, the dune mining closer to Richards Bay, mining in the Karoo. These are all areas that are protected by various agreements, yet mining is taking place with no real concern as to the impact on the environment. Sure, impact studies are done, and recommendations are made for the rehabilitation / restoring of the flora when the mining is finished. To see that this doesn’t work, you only need to travel on the hi-way between Mtunzini and Richards Bay and see the mess they have made all along the dunes.

I went through the list of birds occurring within the Nyl floodplain and of the 426 bird species (46% of the species found in southern Africa) I recognised a few from my travels, but for the most I admit to being totally ignorant of what they look like. I will remedy this by spending some time with my bird manual – Robert’s Birds of Southern Africa (7th edition)

Some names of birds found in the area :-

Almost every species of South African duck is found here from time to time, some in very large numbers.

I also read that there are tens of thousands of migratory birds that cross over the mine area. This could be a potential hazard during migratory events with the mine being brightly lit at night. Most water birds fly at night. The erection of electrical cables and buildings also poses another problem for migratory birds. This could have both national and international implications if the mine should influence the vast numbers of migratory water birds that use the floodplains.